Thursday is my favourite day, we’re over hump day and the weekend is ahead. It is also the day that takes me into country New South Wales.  It wasn’t until I recently blogged about a Thursday workday I realised how full and interesting days up country are.  The distance between visits allows time to process conversations and informations from the last visit before recapping the situation waiting ahead.  No two days are the same.

Once through The Gap of the Wattagan Ranges it’s a matter of a few kilometres before it becomes evident we’ve entered the wine country of the Hunter Valley.  It is the oldest and most well-known wine producing area in the country.  The story goes that in 1797 Lieutenant John Shortland found the Hunter River while chasing escaped convicts.  Some years later someone called Busby established a vineyard along its banks and he had this to say about the area.

“And yet, the man who could sit under the shade of his own vine, with his wife and children about him and the ripe clusters hanging within their reach, in such a climate as this and not feel the highest enjoyment, is incapable of happiness and does no know what the words mean”.

James Busby – A Treatise on the Culture of the Vine & the Art of Making Wine.

Summer has been extraordinarily hot this year and we have several days in a row when temperatures have seldom dropped below 40C (107F) and marginally cooler at night.  Without a reprieve from the heat and the north westerly winds that have been a part of this year’s summer weather the risk of bushfires has been incredibly high.  In the three months from November 2016 to January this year five bushfires have wrecked forests and properties in the Cessnock community, one of the areas I work in on Thursdays.

At the start of November last year, dozens of homes came under threat as a fire raged out of control in bushland around the Cessnock region.  Just a month later more than 1200 hectares of bushfire burnt around nearby Abermain and Neath and one month after that a five-hectare bushfire broke out and closed the Hunter Expressway.  One week later, an inferno engulfed parts of Kurri Kurri and Heddon Greta.  Less than a week after that battle, fire crews scrambled to extinguish a 20-hectare fire in Kurri Kurri.

At the height of the Hunter emergency, more than 250 firefighters and water-bombing aircraft fought the flames as the Hunter ­Expressway was closed with roadblocks between John Renshaw Dr and Wine Country Dr. Volunteers using hoses had to form a ring of water around Kurri Kurri TAFE as 60 residents sheltered inside after being ordered to evacuate their homes.

A week after the fires it seemed that it was life as usual in the area. However, vast tracts of land were now sombre tones of bushfire black and the smoky smell of dampened heat hung heavy. Meanwhile, along country roads, donkeys have their heads tucked into hay barns and kangaroos cross roads as they go about their business.     Birdsong is louder here or am I less distracted; it is quiet and still and organised.

I try and vary the routes between homes as week after week it can be tedious but finding alternate routes that take me to out of the way places keeps me curious.  On one of the less used routes between two small towns I came across this hot air balloon basket.  Despite the rickety appearance of the basket, hot air ballooning is a something I’d have on my bucket list, if I had a bucket list.  The views would be spectacular and I imagine it would be a mind-quietening adventure.  The champagne breakfast advertised would be a non-negotiable as I’m not sure how safe I’d feel once my feet left terra firma. 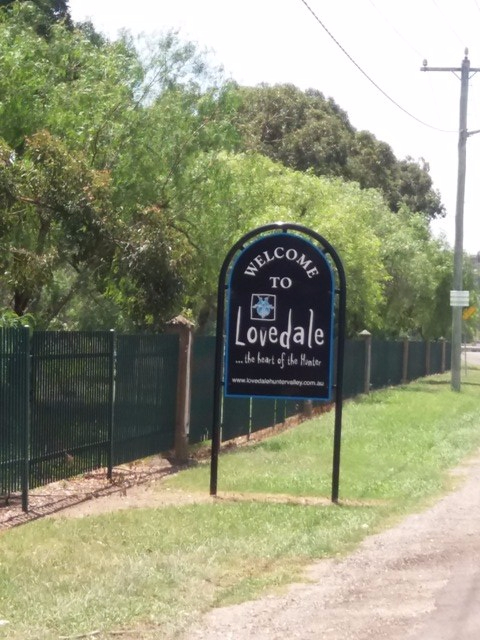 Small towns announce themselves with creative signage and tag lines willing the traveller to stop a while and experience this part of the valley.  Lovedale has produces amazing wines but for me it is synonymous with The Lovedale Long Lunch in May each year.  This year seven wineries around Lovedale will host a progressive lunch serving gourmet food and wines from local cellars.  The MOTH (Man of the House) and I have ‘done’ a few long lunches and had a wonderful time sampling the best the valley has to offer in food and wine.  It might well be the right time for another sampling of what Lovedale has to offer.

And that winds up my day in the Hunter Valley.  Between photo opportunities and seeing things I had not noticed before, I spent time with six people who needed support with drug or alcohol issues.  The travel between homes is a time to process what I need to do before I return next week before ‘leaving’ that client and refreshing my memory about the challenges facing the person to whom I am travelling.