History assuaged my natural curiosity during school and the internet fulfils the role whenever I need to know the specifics of a matter.  English was my second love at school. Words and their meaning have held a fascination since standard four when we had a brilliant spelling and grammar text book presented as a series of quizzes and puzzles.

QP’s contribution to the A – Z Challenge for the letter X is Xerox, a trademark now taken into the English language as a colloquialism meaning copy, I thought a look at the history and some background to the word would be interesting.

For a start Xerox is defined as:  a duplicator (trade mark Xerox) that copies graphic matter by the action of light on an electrically charged photoconductive insulating surface in which the latent image is developed with a resinous powder (source).

The Xerox company was founded in 1906 as the Haloid Photographic Company and  in 1958 Haloid came up with the name xerox from two Greek words meaning “dry writing” – the rest is history.

Today xerox is synonymous with copy or duplicate, which in earlier times would have required a Xerox copying machine to complete the task.  Today we say I’ll xerox that meaning we will photocopy a document whether or not the machine on which we complete the task is in fact manufactured by the Xerox Corporation, or Hewlett Packard, or Brother or any other brand of photocopier. 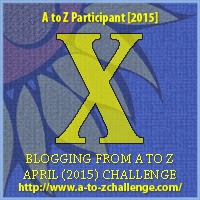